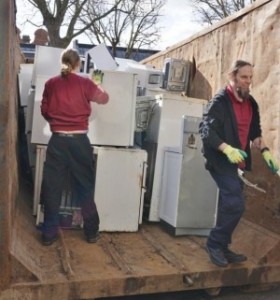 The UK Office of National Statistics (ONS) reported yesterday that raw materials we consume fell from 15.1 tonnes per person per year in 2001 to 10.3 tonnes in 2013.   Over this period much more of our goods have been imported, made from other countries’ raw materials, but the ONS claims to allow for these imports, and that otherwise the 2013 figure would have fallen to 8.9 tonnes.

Better design of our products, like cars and cookers, to use less metal and other materials accounts for part of the fall. But in 2015 more new cars were sold than ever, 2.63M of them, when we thought peak car had already been reached!

Digital media and downloading means we use much less stuff like DVDs, records and cassettes.  These services do require a big infrastructure and it looks set to get larger – UK households now spend more on services, like media, sports and holidaying than on goods. A surprise example of us buying less stuff was Ikea’s announcement that we’ve reached “peak home furnishings”

I think there’s some good news here of a gradual turn round, but we need a much faster reduction in our consumption of stuff to tackle climate change and the other ill effects of our wasteful ways.

So it’s the perfect time for a circular economy when:

Do come to some Circular Cambridge events where we can all play a part in this.