Chris Lee, the founder of Royston Repair Cafe (and the inspiration for much of the Repair Cafe growth throughout Cambridgeshire) has written a blog on his experience of taking part in the World's Biggest Repair Cafe. This blog can be found here 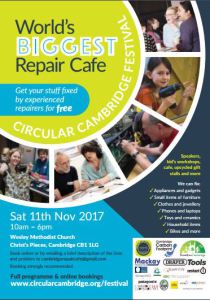 Who said “Waste isn’t waste until we waste it”?

Learning of this clever quote was one of many pleasing things I gained from an event in Cambridge yesterday which could legitimately be said to have a global significance. It’s not every day you can say that about spending nine hours in a church on a wet Saturday in November.

The man associated with the quote is Will.I.Am – someone I associate with a name which I regard as, er… unusual, and whose performances on ‘The Voice’ leaves me cold. In contrast, I’m impressed by his behind-the-scenes activities; the music-man-come- style-celebrity gives his name, time and money to many worthy causes. This includes an international campaign – Fashion Revolution – which aims to sew social, ethical and environmental responsibility into the fabric of the fashion industry.

The essence of the campaign is ‘telling the story’ behind the clothing items that arrive on our high streets and sell at rock bottom prices with, in many cases, scant regard for the people and processes behind their production.

For me, the story behind the product was also at the heart of my uplifting day in Cambridge. It was at an attempt on the record for the World’s Biggest Repair Café – a mass fix of pre-loved and still-wanted broken items – bikes, clothes, electricals, toys, high and low tech kitchen gadgets, gardening equipment, ornaments, phones, laptops, even an umbrella. We were seeking to mend more than 150 items – a record set in France in 2013.

I worked on eight items and was pleased with the result, though many of the fixes where a lot more straight forward than those of my fellow repairers working on more technical problems on either side of me.

There were two garden forks with broken wooden handles (with a combined age of 140 years!) and both deserved more TLC than I could give them in the time I had to work on fixing them. The older of the two was 100 years old – originally owned by the great grandmother of the little girl who attended the Repair Caé with her mum. As the current owner said to me “I could get a new fork or replace the wooden handle, but it’s my mother and her mother’s hands that worked the soil with this particular handle – that’s what matters to me.”

Or the 40-year old binoculars case – a wedding present I think – the leather hinge between body and lid worn torn in two from regular use. This is now replaced with some new leather in a cack-handed repair which, while certainly not beautiful, will hopefully keep those binoculars protected for another 40 years.

Or the 25 year-old hand-crafted ornamental wooden horse and carriage from Russia. A cherished memento that needed some refurbishment – new reins for the horse, re-fixing the carriage harness, reconstructing the passenger’s parasol – it’s journey to be recalled and treasured, I hope, for generations to come.

Then there were the little food related highlights – the edible nuts and screws on some lovely biscuits, the wonderful free three-course meals served up from surplus food by Cambridge Foodcycle.

Most important for me is that yesterday was about keeping so many things in use for longer. The eight items I worked on had a combined age of over 227 years. “But did you set a new world record?” I hear you ask. It doesn’t really matter but, yes, we did – with over 200 items fixed – we well and truly broke it and so, of course, we now need to repair it…