Not only did CCF supporter Seigo and his bride, Romilde, organise a fantastic circular wedding but their story caught the imagination of the national press. As a result thousands of people from all over the UK were introuduced to the ideas of waste reduction, regenerative resource management and the sharing economy! The Daily Mail, Mirror, HuffPost, Reveal and Pick Me Up, Metro, Radio 4 and many more lapped it up. Below is Seigo Robinson’s blog about his circular wedding, first published on his website SocialCircularEconomy. 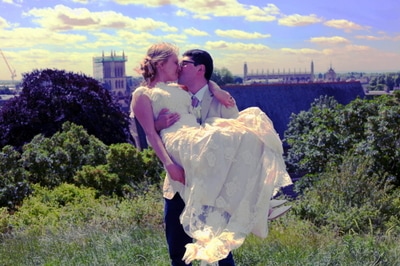 As we are both green minded we were already thinking about how to ensure we minimise our wedding’s environmental impact. However thanks go to Nicole Barton from Cambridge Carbon Footprint who suggested we knock it up a notch and make it a full blown circular economy theme. It seems to have resonated well, with various news outlets covering us after the event.

The following is the meandering personal account of how we put together a circular economy themed wedding. For a more formulaic “how to” guide, please check out the Circular Wedding page.

Before jumping in, I would say that arranging a circular wedding has both environmental and economic (and potentially social) benefits. Note however, since (social) circular economy describes a set of principles, or design boundary conditions, it is necessarily a little harder to put together. That being said, here is how we went about it:

Invites: There were none. Or rather, it was just an email with a link to our wedding website to RSVP. We also had a dedicated circular economy propaganda page, asking folk to think about how they could be more circular in their lives.

Gift registry: Again we didn’t have one. We already have enough stuff and since more than 40% of our carbon footprint is associated with “stuff” it made logical sense to ask for no more. If people felt compelled to give us something, we provided a link to donate to Sarcoma UK, a charity dear to us.

The bulk of the food choice was actually relatively easy to do as I was rather familiar with FoodCycle, a wonderful organisation that really fits within the Social Circular Economy framework. 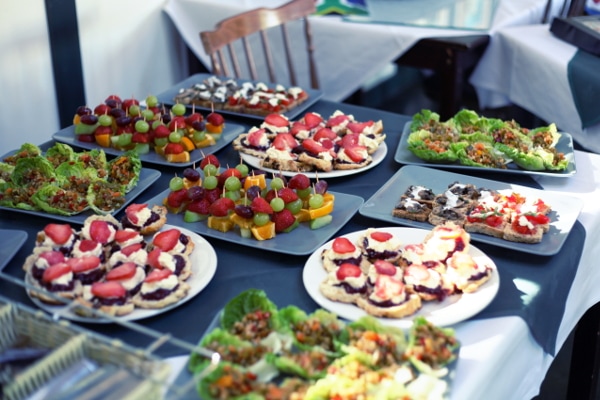 It valorises surplus food picked up from supermarkets to serve up delicious community meals. This means food doesn’t go to waste, supermarkets have less waste disposal costs, volunteers get an opportunity to cook and dish up within a fun team setting and folk in the community, particularly those that are disadvantaged, get a free meal and great company. We enjoyed joining the Cambridge hub for a Saturday morning to support the cooking and knew we had made a great choice. Alex Collis deserves particular praise for all that she does and was very easy to work with.

While FoodCycle took care of the majority of the food needs, we wanted to inject a little of our own heritage into the day – we have British, South African, Japanese and American backgrounds that we wanted to make tributes to. So we spent time looking into local suppliers that could meet these needs and landed on the following:

British: We frequent the Sunday Cambridge market and have long been enamoured by the sweetest strawberries grown in Cambridgeshire by Chris “The Strawberry Guy” (the corner stand nearest Don Pasquale) – so we got 30 punnets delivered the night before. We also had FoodCycle make lovely scones for the dessert.

South African: this is where we went a little astray in terms of being meat-free; hard to do if you know anything about South Africans… We sourced biltong and boerewors from Chapman’s the award-winning South African butcher in Baldock – they also do a scrumptious melktert, a classic milk-based tart.

Japanese: a little harder with the dearth of suppliers and an ability to check provenance but we ended up going with Itsu Cambridge for sushi. My mother also whipped up some dorayaki desserts, a childhood favourite.

American: FoodCycle made some Mac n’ Cheese and Apple Pie. We were meant to have a small amount of sliders made with CamCattle meat (the cows on Grantchester Meadows) but unfortunately I was too slow to get it in the fridge and didn’t fancy taking the risk with our guests – I was particularly annoyed at myself for this because it was one of the few “meat cheats” we had and also one of the most environmentally unfriendly.

We rather enjoyed the preparation for this. We were keen to source as local as possible so ended up tasting with increasing radius until things passed our personal “good enough” threshold (we don’t pretend to be connoisseurs!).

Wine: Chilford Hall Vineyards about 10 miles from us was first in line; we had a lovely tour but only took a shine to their white Ortega Siegerrebe 2015 – we took a couple cases home for the wedding. The sparkling options didn’t quite cut it so we expanded the radius. We found a lovely sparkling rosé from Dedham Vale (~40 miles away); we decided not to make a potentially unnecessary visit and just got a bottle to taste from M&S before ordering a bunch more. We couldn’t find any vineyards close by with a good white sparkling wine and ended up with the Chapel Down brut (IWSC silver) based in Kent. It may not be a surprise but we never found an appealing English red so we took the reduce option here i.e. eliminated it.

Beer and cider: we went with Lord Conrad’s Brewery based about 5 miles away. The beers taste great and is brewed from local sustainably sourced ingredients. Even the waste water is returned safely. Jon was also a thoroughly nice chap and easy to work with. He also sourced our cider for us from the Cambridge Cider Company (Much Merriment and Strawberry Cider).

Other: we stuck with Pimm’s, Cambridgeshire apple juices (Watergull Orchards) and local gins for something harder.

We wanted an informal and fun wedding in a natural setting (both for ambience and energy burden) so we couldn’t think of a better place than the historic Orchard Tea Garden which is just around the corner from us in Grantchester. We chose the zero emission transport mode of a flotilla of 13 punts laden with aforementioned local food, booze and guests, floating the party upriver in brilliant sunshine. We arranged for the punts to be returned by cutting a deal with students – we would cover the hire costs for them to enjoy punting back from Grantchester as long they ensured the punts’ safe return; win-win.

On arrival we were greeted by music played by family and friends, alternate duet sets of violin-cello or flute-piano. English sparkling wine and FoodCycle canapes were available as folk got stuck into a variety of hired or repurposed garden games. The undoubted winner of these was a nod to my Japanese heritage in the form of giant sumo suits which proffered many rambunctious battles. Decorations were limited to bunting made from recovered textiles from Cambridge Community Scrapstore (now being reused in our garden) and a shelf and mirror from Emmaus used to liven up the food serving area (now being reused at home.) Again, these organisations both social circular enterprises i.e. help society using circular economy. We considered a walk to forage wild flowers the day before but with all the running about involved, we decided to leave this out.

​Dinner was also a relaxed affair, a get-it-when-you-want buffet as guests continued chatting and playing outside. As the sun set, we made a short two-part speech – one promoting the circular economy including supplier details and another thanking those that were with us and those not. This part was the only time we used artificial lighting during the day as we then started the silent disco. This was something we were keen on for several reasons:

The oxymoronic silent music took us through to midnight, only interrupted by FoodCycle pizzas around 2230 to provide calories for continued vigorous dancing. We ended the night by doling out favours by FoodCycle – lovely chutneys from recovered food and rejected M&S gingerbread men due to the lack of eyes. That capped off a long but thoroughly enjoyable day – hopefully portending many more for our married life! 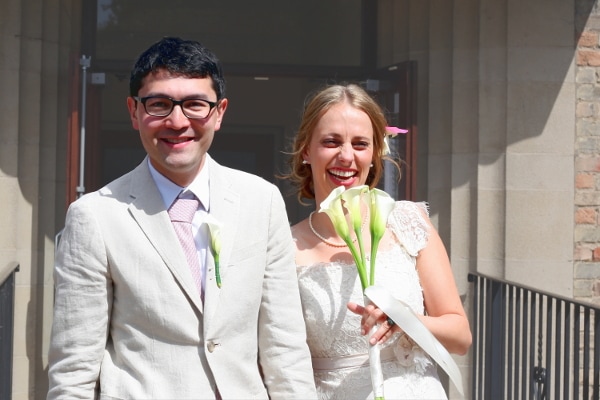