I have just spent the last two evenings at highly contrasting, but deeply connected lectures, by two great thinkers of our time. On Tuesday evening I attended a small, local gathering at the Friends Meeting House in Cambridge to listen to Richard Wilkinson talk about inequality in our society. And then I spent Wednesday evening in the all-together grander setting of the Royal Festival Hall in London to hear Naomi Klein talk about the detrimental impact “othering” is having on our world. 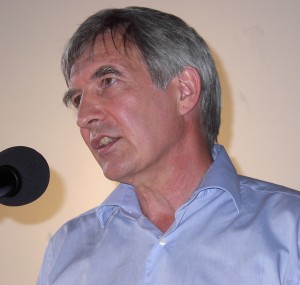 Richard Wilkinson, co-author of The Spirit Level, spoke at a meeting hosted by Cambridge Commons (www.thecambridgecommons.org), an affiliate of the national Equality Trust (www.equalitytrust.org.uk), whose strapline “Because more equal societies work better for everyone” neatly sums up the main tenet of his argument. Countless statistics demonstrate that among rich western countries significant health and social problems occur more frequently in the more unequal societies, like Britain, and that well off people in Britain do less well than their counterparts in more equal western countries on fundamental measures of well-being

Naomi Klein, author of This Changes Everything: Capitalism .vs. the Climate, spoke at the Edward Said London Lecture on the destruction we are imposing on less developed regions of the world by “othering” them – a term Edward Said used to describe “the process by which large swaths of humanity are cast as sub-human, a status used to justify violent expulsion, occupation and invasion”. In her talk Klein examined how these same tools of racial hierarchy have been the silent partners of climate change, continuing to let entire nations drown and others warm to lethal levels.

So, on the face of it, two very different lectures addressing quite distinct problems with our current world. However, at a profound level the issues addressed are deeply connected, since it is the same self-serving attitude promoted by neo-liberal capitalist societies that is causing these ills – the increase in inequality within developed countries leading to a break-down of individual well-being and community values, mirrored by the abusive attitudes of these nation states to their fellow world inhabitants.

And the conclusions reached by these two eminent authors are strikingly similar. The solution to the growing problems of this world is to recognise that only by working together, radically changing our economic structures, and treating our fellow citizens with respect and kindness will we begin to resolve the deep divisions in our societies and the world at large. The belief that the rich can escape the detrimental impact of increasing inequality and rising climate change is misguided in the extreme – the dangers of civil unrest and violent weather patterns will be vested on us all and cannot be escaped through wealth.

As a practicing Buddhist, I have a strong belief in this inter-connectedness of the planet and all beings inhabiting it. And the more we reflect on the ills of this world the more we come to realise that happiness and contentment is not arrived at by increased consumerism and acquisition of more stuff. Rather, happiness comes from the quality of our relationships, with our family, friends and communities – and this includes caring for others less fortunate than ourselves, both within our own countries and further afield.

This view is strongly supported by the vision of a circular economy, as promoted by our current Circular Cambridge festival of events (www.circularcambridge.org). A strong component of this vision for the future is our move away from the current ‘buy it- use it – trash it’ approach to goods, towards a more caring, sharing world with an emphasis on growing community and simpler lifestyles. If you are inspired by such an idea, then perhaps you could explore how to take these values into your own life by taking our Circular Cambridge Challenge (www.circularcambridge.org/circular-challenge) which encourages you to undertake six related actions within a calendar month.

The evidence is overwhelming – we are destroying our world and decimating our communities with our selfish attitudes and never-ending search for happiness in material goods. We need to wake up and make changes fast. We all inhabit the same planet – we are all in this together!