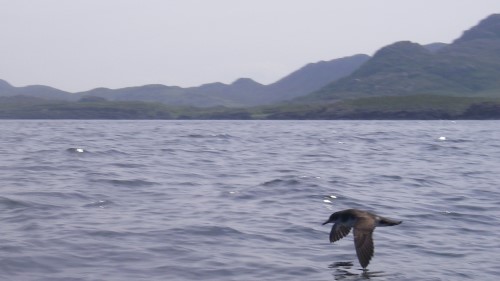 Hundreds of sleek birds swooped around our kayak as Anne and I paddled to the Inner Hebrides.  Their wing-tips skimmed the sea, hinting at their name – shearwaters.  A third of the world population of Manx Shearwaters breed in burrows on the island of Rum‘s mountains,  migrating each year to South America.  These amazing birds are just 30cm long and can live over 50 years!

Spending most of their time at sea, shearwaters and petrels can smell food tens of miles away by detecting minute traces of dimethyl sulphoxide (DMS), which is given off by feeding krill.

As you know, plastic waste from our consumerism that gets into the sea is killing a lot of marine life. Good on the government for finally banning plastic microbeads from cosmetics and cleaning products.  Plastics in the sea are made worse by slimy bio-films that form around each piece and concentrate toxins from the ocean.  Now a new study shows these bio-films also produce DMS, making pieces of plastic smell delicious to shearwaters and petrels, which are six times more likely to eat it than other marine birds. They can gradually starve on a full stomach.

My heart aches for the shearwaters – such wonders of nature!  Please pick up plastic litter on beaches and support campaigns to tackle marine plastic waste.